Wenzhou (simplified Chinese: 温州; traditional Chinese: 溫州; pinyin: Wēnzhōu; formerly Yongjia, Yung-chia) is a prefecture-level city in southeastern Zhejiang province, People’s Republic of China. The area under its jurisdiction, which includes two satellite cities and six counties, had a population of 9,122,100 as of 2016.

It borders Lishui to the west, Taizhou to the north, and looks out to the East China Sea on its eastern coast.

Wenzhou was a prosperous foreign treaty port, which remains well-preserved today. It is situated in a mountainous region and, as a result, has been isolated for most of its history from the rest of the country, making the local culture and language very different from those of neighbouring areas. It is also known for its emigrants who leave their native land for Europe and the United States, with a reputation for being enterprising natives who start restaurants, retail and wholesale businesses in their adopted countries. 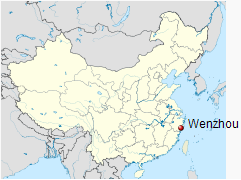